Last night, I posted this status update on Facebook: 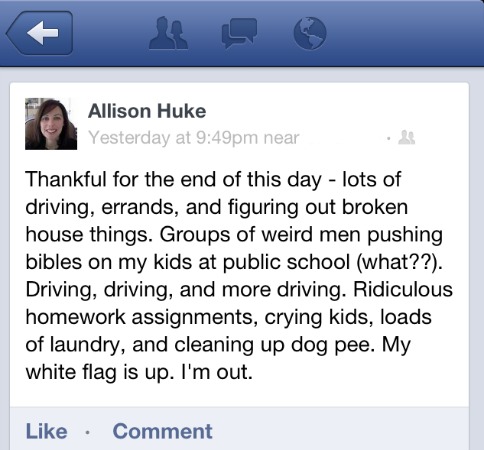 I was tired from the day. The kids were in bed and I was alone in an empty house without adult conversation – which happens often when your significant other travels a lot.

I was just trying to spark a little conversation. And not post something like “So glad this day is over. It was a bad one.” I am not a fan of generic stuff like that. You think “Well, why was it bad? What happened?” Or you just don’t care and move on. Either way, what’s the point?

Also, I feel like people are always posting about all the great things that happen, sometimes it’s nice to see the other side. That way, you aren’t always comparing your insides to other people’s outsides. I am a big fan of transparency – the good, the bad, the honest truth.

I thought maybe I would find someone who had a bad day too – and could commiserate – “Yeah, that happened to me too”, or “Let’s chalk it up to a loss and try again tomorrow.”

I was NOT saying that my life is bad. I know I have a great life and I am fortunate in many ways.

I was NOT saying that other people don’t have problems. Everyone has problems – some fewer, some more, some the same, some different.

But, I didn’t, thinking that most people would already agree – because groups of men should not be waiting outside of our public schools for ANY reason. And bibles should NOT be handed out to kids in public schools. Both of these things are NOT okay. There is separation of church and state (By the way, if they were passing out the Koran to kids, I’m thinking people would feel differently).

Okay, off my soapbox now…

I have to admit, sometimes I feel like giving up on Facebook. But at the same time, I love it as a way to connect with people near and far, and stay current with what’s happening in their lives. I also love finding new friends, and discovering things we have in common.

Instead of giving up entirely, I’m going to start utilizing Facebook’s “friend list” feature more, which let’s me customize posts for different groups of friends – like school friends, close friends, work friends, family, etc. I’m going to make a list called “people who get me”. I’m not kidding. I’m already working on it now.

So, another lesson learned for me. Wow, they just keep coming, don’t they? Now the next time I want to stir up a little evening conversation, I’ll just post to this group of people who know me, love me, and most of all “get” me. No disclaimers required.

Posted in Politics & Other "off limits" topics and tagged controversy, Facebook, lists, status updates, transparency. Bookmark the permalink.
← Journey to Solar – Part Three, Auditing & Evaluation
The Problem with Your Kids Following You on Instagram →