Those of you who know me probably know I’m a big Wahoo’s fan. I am there atleast once a week with the E-man (my son) when he has minimum day. It’s our “weekly date” now that he and his sister are going to different schools for the first time since Kindergarten.

But upon closer inspection, Wahoo’s does pretty well when measured against some green, eco-friendly criteria. I wouldn’t rate is at a ten, but it’s not an offender either.

The food is fresh, with healthy, quality ingredients. My favorite thing is the fresh salsa – a blend of fresh tomatoes, cilantro, onions and peppers. I always order extra, and they happily bring it to my table.

The fish they serve is mainly wahoo. A cousin of mackerel, wahoo is found in warm oceans around the world. In the Pacific, they’re harvested as non-target catch in troll and long-line fisheries – meaning they are caught as fisherman target tunas and other fish. Most of the wahoo in the U.S. market comes from Hawaii, where the fish is nicknamed “Ono,” the Hawaiian word for “delicious.”

No regulations currently apply to wahoo specifically and they are not found on Monterey Bay Aquarium’s Sustainable Seafood Guide. So we can only go with what we know – wahoo fish grow quickly and their biology makes them resilient to fishing pressure. Catch trends have so far indicated that this is true, and regulations are not yet necessary. However, because they are caught on longline, they are subject to several regulations put in place to reduce the impact of troll and longline fisheries in general, as to their impact on other species.

For these reasons – current lack of wahoo research and possible sea turtle bycatch (as a result of longline fishing) – The Monterey Bay  Aquarium Seafood Watch (the expert voice on this subject in my opinion) considers wahoo a “Good Alternative” rather than a “Best Choice.”

Okay, good but not best. I can live with that.

For non-meat eaters, or those (like me) reducing their meat consumption, Wahoo’s also has a number of vegetarian options of the menu. My favorite is the mini Wafu bowl, a mixture of sauteed polynesian tofu, mixed bonzai veggies and a choice of white or brown rice – I always go with brown. I throw my extra salsa on the top, and it’s a good, healthy meal for under $6.

I am also very pleased that all the serving pieces in their restaurants, from cups to plates to utensils are reusable – not something you generally find in a “fast-food” environment.

And they have great community promotions – like the one they are running right now. From November 1-4th, you can trade in your Halloween candy for a free kid’s meal. Just load a bag up with candy, bring it in along with a printed card for the promotion, and get a free kid’s meal. Don’t have a card? No problem, just go to this link on Wahoo’s blog, and print one out.

We went today. My son said goodbye to some of his candy – he wouldn’t part with all so I let him keep some of it – and hello to a free kid’s meal. 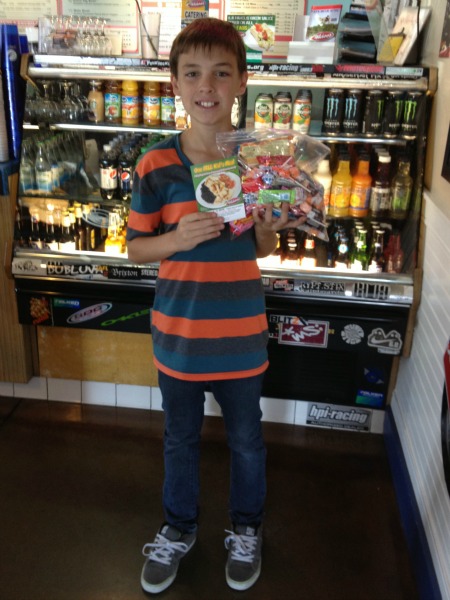 Candy is donated to a charitable organization. I inquired at my local Wahoo’s and they said it was a “children’s charity” but weren’t sure of the exact name. I have sent a tweet to Wahoo’s for clarification and will update this post when I hear back from them.

With all of that said about the good side of Wahoo’s, there are a few areas where Wahoo’s does not rate well on my green scale.

The first is on their to-go packaging. Most locations that I have visited still use styrofoam – boo! If you order in bulk, like for a party, it comes in aluminum trays, but individual to-go orders are in styrofoam containers.

Also, I would like to see Wahoo’s be a bit more transparent in their food sourcing – more like the Chipotle model.

Changing to a more sustainable packaging for to-go items and improving their transparency in ingredients would be two changes that would fit perfectly in with their surf, beach culture, and I think would seriously boost their customer trust and loyalty.

Considering everything, Wahoo’s still lands on the “good” side of Allie’s list. Not a ten, more like a seven or eight, but for a healthy, sit-down meal for a family of four, for just $20, how can you beat it?

And remember to always leave a tip for those nice servers who bring and clear all your food from your table. It makes them happy and you can count it as good karma. 🙂

This is the first installment of something I am calling “Allie’s List”, where I review local restaurants and businesses in terms of their “greeness”. I will look at things like food sourcing, packaging, waste, etc. I’m not saying it’s totally scientific – just one green girl’s opinion.

For my first post, I want to talk about a place called The Bagel Shack, which has three locations in Orange County – San Clemente, San Juan Capistrano and El Toro.

I stopped by the El Toro location a couple of weeks ago. After dropping my daughter off at practice early Saturday morning, I headed over to Home Depot to pick up some supplies for our weekend projects.

I was STARVING, and craving and egg and cheese bagel, when I looked across the parking lot and saw The Bagel Shack. Woo-hoo, I was so excited.

I was less excited when I walked up and saw a line out the door. But then I figured, hey, the place must be good if this many people are in line.

While I was waiting, I saw someone walk by me with a styrofoam cup. “Well, I’m not getting a drink (I already had my coffee in my reusable mug), so it’s okay.” I said to myself.

Then, another person walked by me with a styrofoam box with a bagel inside. “Well, I’m not getting it to-go so it’s okay.” I justified.

But then, one person after another after another walked by with a box of styrofoam with a bagel inside. Now I realized, THEY PUT EVERY SINGLE INDIVIDUAL BAGEL IN A STYROFOAM BOX – even for those customers who were eating in the restaurant.

By the way, styrofoam (the technical term is Polystyrene) is pretty much the worst packaging on the planet. I could go on and on about how awful it is. Here are just a few of the problems:

Right then and there, we pledged to never, ever, ever…use styrofoam again.

So there I was in line at The Bagel Shack and I was shocked – I could not believe it. I mean, how easy is it to just wrap a bagel up in some paper and send the person on their way? Really, a styrofoam box for EVERY SINGLE BAGEL? Why on earth is that necessary?

So, I did the only thing I could, I turned around and left – hungry and depressed.

And then, I found them on Twitter and sent them a quick tweet to let them know how I felt. 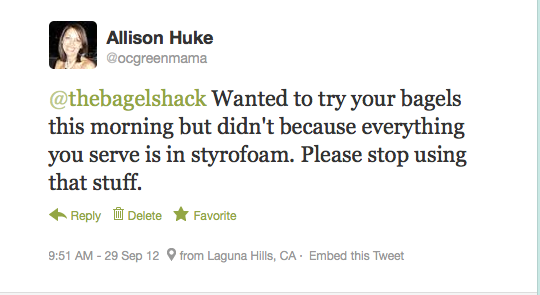 And now, two weeks later, they still have not answered me.

So that friends, is why The Bagel Shack – no matter how good their bagels may taste – is on the “bad” side of Allie’s List.

I wish that they weren’t because the bagels look quite tasty. But to me, nothing served in a styrofoam box, no matter how mouth-watering, is worth eating.

So Bagel Shack, please clean up your act. Start wrapping your bagels in paper (non-toxic, biodegradable, safe for food contact) and get back to me. Because those bagels really did smell so good…